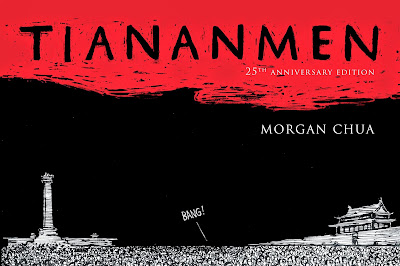 Epigram Books is bringing out a new edition of Morgan Chua's Tiananmen, the lost classic about the crackdown of the student movement in China in 1989. People don't talk about Tiananmen these days except for the Chimerica play of last year

and this book is almost unheard of. I have been wanting for it to be back in print for some time and it's finally here, the 25th anniversary special edition. I first read it in the national library eons ago. It was the only Morgan book available then in Singapore in the 1990s.

Urban legend has it that agents from Beijing swept into HK to buy up all the copies when the original book was released in 1989. This is unconfirmed but the fact remains that the book was sold out almost immediately and has been out of print since then. If there is some truth to this myth, it is no wonder. Because this is Morgan at his satirical prime, before he decided to do cartoons about Mdm Kwa and Mr Nathan. This is Morgan drawing blood and letting it bleed.

This is the Morgan we should remember. This is the standard of work we should aspire to. Historical amnesia is a terrible thing, to forget what was possible and achieved in the past. The same goes for Tiananmen and the tank man image. I suspect that's why this Cirque du Soleil production got passed by the Chinese censors in the first place last year. Even the censors had no knowledge of the event and the image.

I told Joe Gordon of FP blog about the book and he has written about it here.

Go get before it disappears again.
Posted by ct at 7:47 AM No comments: