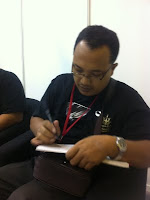 Indon artist Ardian Syaf has come a long way since drawing out of a box at the last STGCC. Last December, he wasn’t a guest of the convention and he came on his own. But sharp-eyed fans knew gold when they spotted him sketching at the side. They recognized that this was the upcoming artist of Batman Blackest Night, Brightest Day and Birds of Prey. 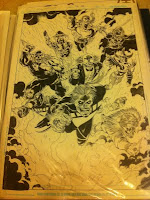 Ardian didn’t have a table and had to ‘squat’ with some local artists, who extended that ‘kampong’ Southeast Asian solidarity. The pages he brought for sale flew and he took orders for sketches. (see Hawkgirl)

Ardian started his career in 2007 doing Dresden Files for Dabelbrothers Publishing. That lasted for 11 issues. His first project with Dabelbrothers titled Take It To Chance written by novelist Catherine Murphy actually came out after that. After signing to the Spanish agency, Utopia Studio, Ardian became a fill-in artist for Marvel. He draw 2 issues of Nightcrawler and later Captain Britain & MI 13. In 2009, he signed exclusively to DC.

He has yet to visit the United States, but has been invited. Now he is waiting for the recommendation letter to get his visa. He is part of the Southeast Asian contingent who are helping us to imagine New York City in the comic books filtered through their own imagined reality of the Big Apple.

I met Aridan at STGCC 2011, now an official guest of the con.

Q: What is your value proposition for DC or Marvel? What does Ardian Syaf have to offer in terms of a different style?

Q: Do people in Indonesia know your work?

In the early days, my neighbours thought I was unemployed! I lived in Tulung Agung, a small town in East Java. They thought I was a bum.
(amazing how the world has shrunken and become more of the same – Ardian is able to email his work to America from a small sleepy town in East Java. US pop culture has permeated everywhere. Cultural imperialism!)

Q: Is there a pay difference between artists in Southeast Asia and artists in America?

A: No, it depends on the deal made for you by your agency. But if you are a top artist, you get the top artist’s rate.

Q: Will you be drawing for Marvel soon?

A: My contract with DC is ending in September 2011, but I will be renewing it. There are opportunities with the 52 reboot. I will be drawing Batgirl. (see sketch) 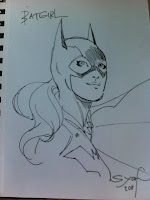 Q: But which Marvel character would you want to draw if you get the chance?

A: Wolverine! I love Wolverine.

Q: What personal projects would you want to do?

A: I would want to work on an Indonesian project with a friend. Tomb Raider meets magic combining with the superstitious beliefs of Indonesia. Friends keep asking me to do my own story. One day.

Thanks to Novianto Hernawan, who was the translator for the interview. 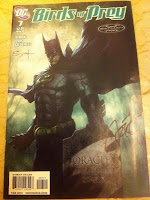