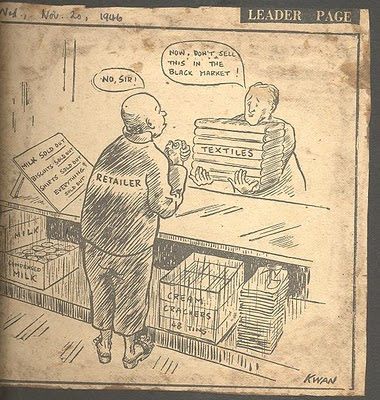 There is an earlier entry discussing the black market situation in 1946. Even back in 1945, it was bad. 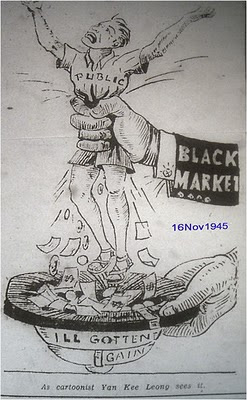 The Malayan Tribune, 16 Nov 1945. By the famed MT cartoonist, Yan Kee Leong. (thanks to Loh Kah Seng for the cartoon)

The Malayan Tribune, being an anti-colonial paper, had the best cartoons in town - biting, satirical and drawing blood with each stroke of the pen. Here are the cartoons commissioned by The Malaya Tribune for the first anniversary of the arrival of the British after the Japanese surrender, 5 September 1946. All compare 1946 to the Japanese Occupation. There is a touch of irony calling them ‘Liberation Day Cartoons’. They deal with the black market situation as well.

The first one appeared on the front page. 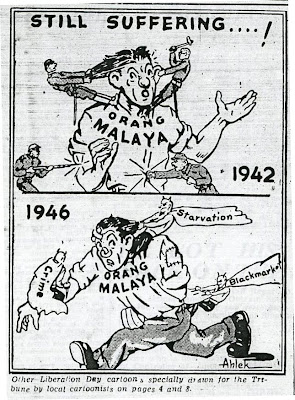 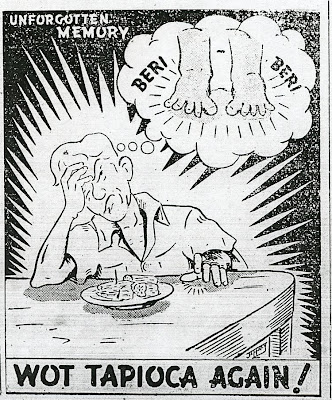 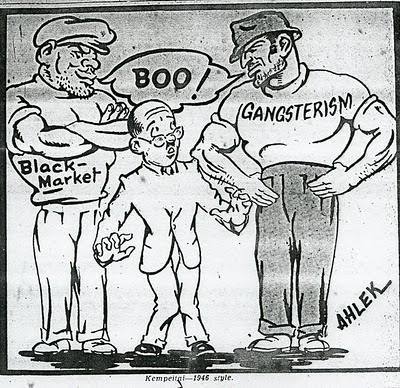 These cartoons appeared in the 5 Sept 1946 edition of The Malayan Tribune. Kwan did not draw any cartoons about Liberation Day during that first week of Sept 1946, boycotting the fact altogether. Instead he focused on the rice shortage issue and targeted Killearn.

All these explain why the British colonial administration complained about the small turn out to mark the first anniversary of the end of the Japanese Occupation. The rice shortage situation was very serious. No one was in the mood to celebrate anything. In fact, things seem to be worse than under the Japanese!

Thanks to Kevin Blackburn for the info and cartoons.
Posted by ct at 8:21 AM