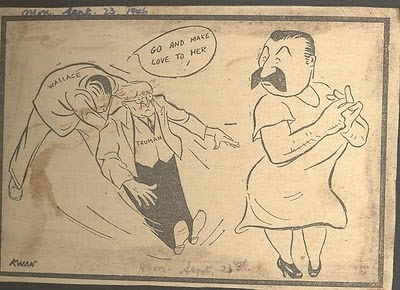 Kwan was concerned about international politics too. The Potsdam Conference of 1945 had divided Europe into two spheres of influence under the Allied forces and the Soviets. But the honeymoon was soon over, although former US Vice-President and then Secretary of Commerce Henry Wallace had made a speech on 12 Sept 1946 about how the US should be friendlier to Stalin. He was forced to resign as Secretary of Commerce on 20 Sept, by the time this cartoon appeared.

Having survived WWII and the Japanese Occupation, it must be scary for Kwan to see the world plunging into a new Cold War. Especially when you are 26, married and wondering what the hell is going on with the world.

For those of us who study postwar Singapore history, certain years are significant - 1959, 1961, 1963, 1965 and so on. But imposing that on world history, while we are concerned about the Merger Referendum of 1962, let's not forget that the Cuban Missile Crisis happened that year as well. How did people in Singapore feel about that, the world on the verge of WWIII?
Posted by ct at 10:25 AM