Heroes in the Comic Universe

Do you know that the inspiration for the look and feel of every superhero or super-villain action figure is inspired by the storylines created for comics series and graphic novels? You will be amazed at the stories behind the creation of these action toys. Let the die-hard action toy collectors tell you more at this session! There will also be a unique showcase of action figures and comics by the collectors. Feel free to bring along your own collection and we’ll offer you a platform to tell your stories about your Superhero! Brought to you by G & B Comics. Free admission.
Posted by ct at 10:10 AM No comments:

Drawn from Shakespeare – A Manga Workshop with Paul Duffield

Drawn from Shakespeare – A Manga Workshop with Paul Duffield

Having illustrated the popular manga-Shakespeare, The Tempest, award-winning manga-artist, Paul Duffield, will be conducting a special three-hour manga workshop covering a myriad of topics including graphic novel storytelling techniques and character inspiration and design. This workshop is not to be missed by manga and comic enthusiasts!

Paul’s works include Freakangel, an online comic written by Warren Ellis and illustrated by himself as well as an animated film, Rolighed, which received ‘Overall Winner’ at the 2006 International Manga and Anime Festival.

This workshop is free but registration is required to confirm a seat. To register, please contact The Arts House Box Office at 6332 6919 or email enquiries@toph.com.sg

Participants must bring the following for the workshop: pencils, fineliners, rulers, sharpeners, erasers.

The focus is primarily on American Superheroes vs Manga Super Villians

- As Buddhism teaches that everyone can become a Buddha, the comics reflect that.
vs
Christianity teaches that Jesus Christ is the Chosen One, and that heavily influenced the comics.

- Hero must train, go through many trials of fire and hardship before attaining status.
vs
Hero often bestowed powers which developed little over time.

- Heroes embrace their powers (which is why Hiro, the only Asian in the hit tv series Heroes, was the only one who immediately decided his powers are for saving the world).
vs
Heroes see their powers as burdens that often hurt those they love (Spiderman and Superman). The Americans in Heroes hated their powers.

- Strategy and cunning important in attaining victories.
vs
Win by brute strength.

- Pursuit of skills often seen a end by itself.
vs
Personal vendetta against criminals and wrong doers.

How to create your own superhero?

Give your superhero a biography

Strategy for thinking out of the box

Take a classic villain from Japanese Manga and pit his wits against the Superhero you created.

PS: This is a method reported by a recent cover story of WIRED magazine, about Manga fans self-publish comic books where established characters from different stories are put together to create unexpected and refreshing new plots and scenarios. The Japanese comic establishment allows this, even though there is a clear infringement of copyright laws, and uses this to uncover new comic talents. In America, such a situation cannot occur as DC and Marvel's legal teams would rigorously pursue the offenders.


Contributed by Otto Fong
Posted by ct at 11:43 PM No comments:

Pondering on popular culture and comics

By nature, pop culture is part of the ephemeral and is meant to be disposable. But sometimes the most throwaway line from a pop song, snatches of dialogue from a movie or comic book gather momentum, meaning and gravitas over time, pretty much depending on your mood and frame of mind.

In the past, the learned would quote Shakespeare or lines from TS Eliot’s Prufrock as part of some witty repartee. With the rise of a global mass culture aided by the internet and Facebook, most students, whether they are church-goers or not, don't catch the biblical references in English literature. They have no idea when I talked about the road to Damascus being long and difficult.

But whether this is truly the age of high culture in retreat and the decline of Western civilization as expounded by cultural critic, Harold Bloom or film director, Penelope Spheeris, pop culture is here to stay. So what if people don’t quote the poets, Keats or Yeats anymore to express themselves? If the young of today could find comfort and expression in The Killers and they help our youths make sense of their lives, that’s good enough for me. Like The Who sang, the kids are alright.

There lies, I believe, one of the most powerful and appealing aspects of pop culture, whether they are songs on the radio or the latest Hollywood blockbuster. At the mass level, they entertain us, inform us of the world (sometimes) and help us to interact with each other when they serve as a talking point among friends and strangers.

But at some other level, they also speak to us, help us understand our own thoughts and feelings because they become the medium for us to project our intellectual and emotional states. The new year brings new resolutions, challenges and choices. Reading the last issue of World War Hulk (Marvel Comics’ mega event of last year) really helps to put things in perspective for me. As the angry Hulk lashes out at the world for the umpteenth time, he came to the realization: “They can call you whatever they want. Saviour, destroyer, all that matters is what you choose.”

I've been reading comics long enough to accept that if it takes a green raging monster to give me some pov, then I’ll take my words of wisdom from wherever they come from.

So whether it’s Radiohead’s new album (“I don’t want to be your friend, I want to be your lover”) or listening to canto-pop king, William Scorpion belting his heart out at Dragonfly when you are getting yours broken, pop culture is about the here and now. It deals with the immediate experience, and by that very nature, if you listen hard enough to that song on your ipod, it shares its secrets (or is it the other way round? – you are sharing your secrets) and provides relief and revelations.

"I'm all the days that you choose to ignore"
Posted by ct at 9:54 PM No comments:

Following World Cyber Games (WCG), Singapore will add another major otaku/geek convention to the calendar of events. The SINGAPORE TOY & COMIC CONVENTION (STCC) will be the first of its kind in Southeast Asia.

The convention, modelled after San Diego Comics Convention and the Tokyo Game Show, is organised by Play Imaginative - the people behind the conceived-in-Singapore urban vinyl series “Trexi“. The three day event, from 27 to 28 June, will be held at Suntec Singapore International Convention and Exhibition Centre.

The first day is reserved for the industry and media, with 28 to 29 June opened to the public. Admission is expected to be free. There’s plans for a cosplay contest, animation screenings, toy (exclusives?) redemption, autograph sessions, art auction and workshops/talks by industry practitioners. Special events include the 45th anniversary of Old Master Q (Lao Fu Zi/老夫子) Showcase. Check out the official event web page for programme and updates.

The organiser intends STCC to be an annual event that will bring new audiences to the world of toys and design. The convention targets to bring in 150 exhibitors. Major industry players from Asia, Europe and North America will be attending the event.

FSc (aka Foo Swee Chin) made history as the first Singaporean comics artist whose works got published in a monthly manga magazine. Her newest work, “Noirstorborg” was published in Vol. 16 of Comic Ryu 「comicリュウ」 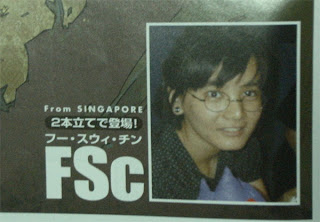 But Who’s FSc? Although the preview notice in Vol.15 of the monthly had described FSc as a popular (”シンガポールの人気マンガ家“) Singaporean comic artist, she’s not yet a household name in Singapore. In fact, I doubt many comics fans here know who she is unless they’re fans of Goth comics such as Lenore, Gloom Cookie etc or have been following the local doujin scene (or if you’re a card-carrying member of Latendo).

READ ON to find out more about FSc
Posted by 0ne at 1:44 PM No comments:

Registration is required. Please email your particulars to sharon.KOH@nlb.gov.sg and indicate “Superheroes vs Villains” in the subject field.

While most would appreciate the artwork and tight story plots in comics, fans are often separated into the graphic novel or manga camps. What will happen when the superheroes and villains in both graphic novels and manga meet? Learn how to create a comic character and we will have a showdown between good and evil.

When we were younger, we all tend to think that superheroes possess super powers. How cool is it to be able to stop time whenever you want, or have super powers like speed and agility? We would be able to skip school or get good grades and anything we wanted, really.

As we get older however, we realise that sometimes we need more than superpowers to get through the day. We’d need humility, bravery and kindness in our lives. This January, come join us as we celebrate the heroes that we want to be in our everyday lives.
Posted by ct at 11:44 PM No comments: