Troy's new comic. Macham choose your own adventures.
Is he still in love with Minx?
Thanks to Dave for alerting me about this.

http://www.drearyweary.com/Forgetting/
Posted by ct at 4:46 AM No comments:

A tale of 2 cities - more of the same

2013 is over. I had the chance to attend two comic cons in two different countries. So how do they compare with each other? 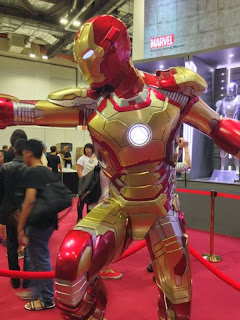 Singapore Toy Game and Comic Convention (STGCC) (31 August to 1 September) – a staple in the pop culture event calendar of Singapore. No surprises here, STGCC runs like a well-oiled machine. The usual Western guests were invited: Adi Granov, David Mack, Joe Madureira and a returning CB Cebulski. We have two invited artists from the Philippines, Dexter Soy and Lyndon Gregorio. Stanley Lau is the local rep, although he is originally from Hong Kong.

Other than the official guests, the Artists’ Alley was the place the catch up with what local and Southeast Asian artists were up to. Andie Tong had a great Ultraman poster for sale and Carlo Jose San Juan, the medical cartoonist, was back to sell his unique comic strip. Lefty and Tan Eng Huat had a new Zero Hero: Giant Killer graphic novel. Others who were around: Garrie Gastonny, Sonny Liew.

But the real stars of the con are the beauty and machines – sexy cosplayer Vampy Bit Me attracted a lot of attention and everyone wanted to catch a glimpse of her, and maybe a bite... The machine is Iron Man. The Marvel movie franchise is the still hottest thing in town and all the suits were on display. Iron babes were also walking around to take photos with fans. If you don’t pay attention, you would think you are at an Iron Man convention. 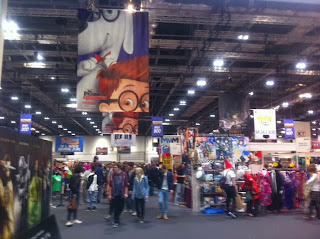 MCM London Comic Con (25 to 27 October) – dubbed UK’s leading comic con and the biggest event of its type in Europe. Here are the stats: the show had grown from strength to strength. In terms of exhibition space, it has expanded from 25,000 to 34,000 square metres. Which still didn’t help if you had tried to come in on Saturday afternoon (26 October). You would have easily queued up for an hour just to buy the tickets and another hour to get in. No wonder, a record-breaking 88,000 people attended the event over the three days, up from the previous high of 76,000 attendees when the event was held in May.

So does the show live up to its hype? For sci-fi TV fans and cosplayers, it does. The EuroCosplay Championship 2013 had its finals there. The cosplaying was global and cross-media, from manga to games. But for the comic fans, there were not many big name artists. Bernard Chang and Sean Chen were there. Still, if you hang out at the Comic Village, you have David Hine, Gary Erskine, Aces Weekly (David Lloyd), Emma Vieceli, Tim Bradstreet and Al Davison there to chat, sign your books, and maybe get a sketch. Our own Hu Jingxuan had a booth there as well to draw you in the style of Downton Abbey. 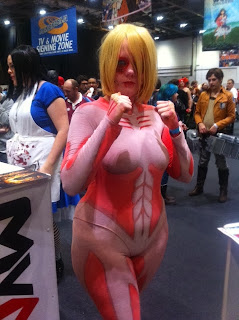 STGCC and MCM London Comic Con are great for weekend excursions and family affairs, if you can tahan the crowd.

Both cons highlighted that for one to get the audience, you need to showcase the whole spectrum of pop culture. Comics is just one component in the cons now. It has to struggle to stand out. The fans will have to look out for it and give their support.
Posted by ct at 5:45 AM No comments: