The power of RM$5

Zunar has been selling these at rallies for RM$5. This is to reach out to the rural masses who may not have accessed to information about the coming Malaysian general elections, their 13th since 1957.

Zunar and his artists are breaking it down for the people - how much Najib's wife is costing the individuals.

Ask Zunar about his agit-pop this Friday at Select Books, 7 pm. 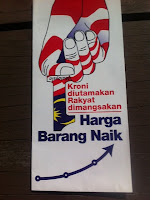 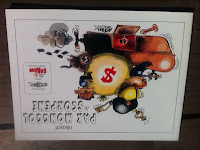 A friend alerted me that Kwan Shan Mei passed away in Vancouver last year. I remember reading her Mooty the Mouse stories in the late 1970s. I was told she drew cartoons. Anyone got info?

What is the role of political cartoons in society? Do they merely reflect public opinion or do they shape it? Should they in the first place?

Zulkiflee Anwar Haque (better known as Zunar) is Malaysia's most important political cartoonist right now. His books are banned. He has been arrested and persecuted for drawing political cartoons. He is partisan, has strong views about politics in Malaysia and provides interesting commentary about the state of things up north. Especially with the 13th General Elections coming up in April.

NB: for an interview with Zunar.

Happening this week at University of Sydney and the Art Gallery of New South Wales. Organized by friends who did the Women Manga conferences in Singapore (2011) and Hanoi (2012). FSc will be there too.

So if you are in Sydney, do go.

While manga began as an art form specific to Japan, today a global boom in these Japanese style comics is underway. Ever increasing numbers of girls and women are participating as creators and consumers worldwide. In fact, women now dominate the realm of fan-created works, and non-Japanese comics for girls and women contribute significantly to the exploration of gender and sexuality. This program forms Day 3 of an international conference organised by the Women and Manga Project and hosted by the University of Sydney.