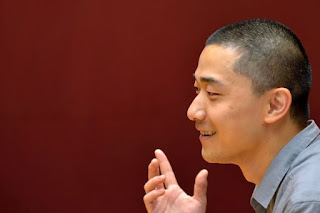 The Singapore Writers Festival is round the corner and one of the guests I am looking forward to to meeting is Ken Liu. You could say he writes science fiction, but he has his own opinion on that. He has just released his first novel, The Grace of Kings, after written many award-winning short stories. He is also a translator of Chinese science fiction. 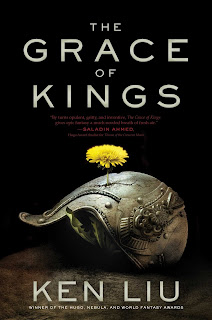 Q: Tell us about The Grace of Kings which I really enjoy.

The Grace of Kings is the story of two unlikely friends, a bandit and a duke, who grow to be as close as brothers during the fight to overthrow an evil empire, only to find themselves on opposing sides of a struggle for the definition of a just society once the rebellion succeeds.

I describe the novel as a “silkpunk epic fantasy,” by which I mean that I’m writing with and against the tradition of Western epic fantasy—as began by Tolkien—by infusing it with an East-Asia-inspired aesthetic (both technological and philosophical) that embraces, extends, and challenges fantasy/historical tropes that are assumed to have medieval European or classical East Asian origins.

The story is based on a loose re-imagining of the historical legends surrounding the rise of the Han Dynasty in a secondary world archipelago setting. This is a world of politics and intrigue, of love purified and corrupted, of rebelling against tyranny and seeing one's ideals compromised, of friendships forged and sundered by the demands of war and statecraft. There are vain and jealous gods, clever princesses who overcome massive armies, battle-kite-riding assassins who hold on to the honor and glory of another age, queens and generals who strive for those who cannot fight, and teachers with magical tomes that tell the future written in our hearts.

Q: You have said that The Grace of Kings is about rebellion and change, and questioning the world. What sort of punk music do you listen to?

I tend to resist the idea of identifying "punk" with "punk music" – the very notion of rebellion is as old as there has been power and authority. I do think Mata Zyndu, my flying-kite-riding, massive-sword-wielding, no-prisoner-taking warrior would make a pretty good lead singer for a punk rock band.

Q: Which are your favourite wuxia novels and writers?

I haven't been able to find much contemporary wuxia that I enjoy, alas — though many Chinese-language and English-language writers are incorporating wuxia elements into other genres in interesting ways.

Q: Do you consider yourself a Chinese writer, an Asian-American writer or a writer of speculative fiction?

I'm an American writer, and I think all fiction is speculative insofar as it is the convention of art to literalize metaphors. I write with and against the Anglo-American literary tradition, a tradition that has been enriched and challenged by its imperial stance and history. 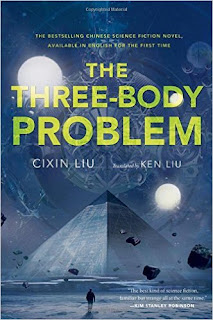 Q: Do you think your stories and translation change readers’ perception of what is Chinese science fiction?

My own stories are only sometimes "science fiction" (though I don't much care about genre labels) and always American, so readers coming to them to look for "Chinese science fiction" would be very disappointed. :)

As for the translations, I've always had only one goal: share stories that I love (like Liu Cixin's breathtaking The Three-Body Problem or Chen Qiufan's trenchant and thrilling The Waste Tide) with other readers so that even those who don't read Chinese get to enjoy them with me. I tend not to think in terms of broad, ill-defined categories like "Chinese science fiction," preferring to treat each work and writer as individuals, and I hope Anglophone readers who read my translations do the same.

Q: You talked about how traditional Chinese culture tries to avoid open conflict, preferring to find a way to encompass differences without losing distinctions. You said that a lot of your fiction is driven by this way of viewing the world. But the ending of The Grace of Kings and the final fate of Mata Zyndu seem to go against that. Kuni Garu went for winner takes all. Has there been a shift in your thinking about power and conflict?

You have quoted from an interview I did with Betsy Huang (http://aalr.binghamton.edu/specfictioninterviewliu/):

"In many Western ideas about conflict, there’s this notion that one must pick a side, and that there must be a right side and a wrong side, and that to be on the right side, you must defeat the wrong side. That is almost never how classical Chinese philosophy deals with conflict. Confucianism in particular has a deep aversion to that view of conflict. In Chinese culture, when there are two very different or opposing views, the tendency and the instinct are to combine or harmonize them rather than to pick one over the other. This frustrates Westerners a great deal."

Note the many qualifiers I put in there – they’re important.

I like to read the fate of Mata Zyndu in this context. Without spoiling the book too much, there isn't a clear winner when the ending is viewed through classical Chinese philosophy (which is, in any event, far more diverse than Confucianism). Indeed, there isn't a clear winner when viewed through a Western lens either. Mata Zyndu may have died, but that isn't the same as total defeat.

Q: How does one deal with representations and stereotypes in literature?

Literature is just a part of culture, and culture is constructed by all of us. The only way for culture to be redeemed from harmful and limiting stereotypes is for all of us to demand creators do better and to participate vocally in the construction of our shared global culture.

Q:Have you considered adapting any of your stories into comics or movies? How do you think silkpunk would translate into a visual format?

I think silkpunk would look fantastic. I'd love to see The Grace of Kings and my short stories adapted into a visual medium.

Q: Why is history important in speculative fiction?

There's this idea that art shouldn't be about what happened – but we're all products of history. The injustices of the past led to the imbalances of power in the world we must confront today, and as long as art is intended to be interpreted and consumed by audiences who must live in the real world, history will shape the interpretation of art.

Q: Do you think character is fate?

Probably depends on the definition of "character" and of "fate". I like to think that we are shaped by the world but we also shape it.

Q: The needs of many outweigh the needs of one or is it the other way round? (obligatory Star Trek reference question)

Neither. I don't trust any moral principle that can be reduced to an equation.

Q: Great men are products of their times or do great men create the times?

Ha! I'm afraid that this question will soon cease to be meaningful when we all live under the rule of machines far surpassing us in intelligence. By the way, this is why I always say nice things about our soon-to-be robot overlords. 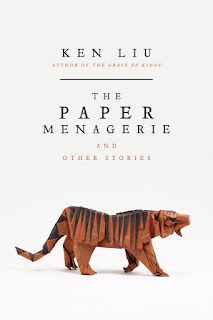 You can catch Ken Liu at these SWF panels:

From epic fantasy to science fiction, these modes of speculative fiction have emerged from both the East and the West in uniquely inflected ways. SP Somtow and Ken Liu discuss the emergence of Asian speculative fiction and its place in contemporary literature.

“A short story is the ultimate close-up magic trick – a couple of thousand words to take you around the universe or break your heart,” opines Neil Gaiman. Some of today’s best proponents of the art form – American Ken Liu and Singaporeans, Stephanie Ye and O Thiam Chin – will analyse the craft.