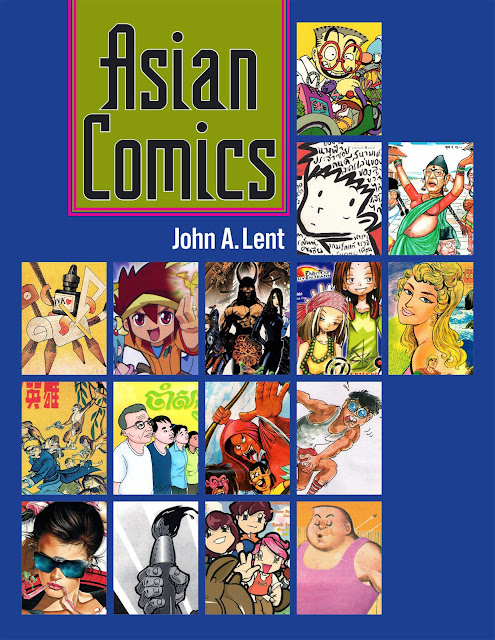 I wrote a shorter review of Asian Comics here:
http://www.parkablogs.com/content/book-review-asian-comics-john-lent

But this is the full works. Go get.

Asian Comics by John A. Lent (University Press of Mississippi, 2015)

It is fitting that I got the opportunity to review John Lent’s Asian Comics for Uncle Jam. I first met John Lent, then Professor of Communications at Temple University, when he toured Southeast Asia in the early 1990s to research about its comics. He arrived in Singapore in 1992. I was then the comics editor for BigO, a rock-pop culture magazine and John soon tracked me down to interview me. In turn, I interviewed him for BigO and I got him to write for BigO as well. He recruited me for Witty World, the international cartoon magazine he started with Joe Szabo. It wasn’t long before he introduced me to Phil Yeh, the publisher of Uncle Jam. The rest is history.

Over the years, I have made use of many Lent-edited volumes for my own research into Singapore and Southeast Asian comics. He is a pioneer in this field and books like Asian Popular Culture (1995), Themes and Issues in Asian Cartooning: Cute, Cheap, Mad and Sexy (1999), Pulp Demons: International Dimensions of the Postwar Anti-Comics Campaign (1999), Illustrating Asia: Comics, Humor Magazines and Picture Books (2001), Comic Art in Africa, Asia, Australia and Latin America through 2000: An International Bibliography (2004) and Southeast Asian Cartoon Art: History, Trends and Problems (2014) are seminal reference books for anyone interested in Asian comics. That would also include the International Journal of Comic Art (IJOCA) which Lent has been putting out since 1999.

Now, Lent has finally put together all his research on Asian comics since the 1980s into one oversized hardcover volume that is 342 pages. The book has 17 chapters and is divided into three sections: East Asia (China, Hong Kong, Korea, Taiwan), Southeast Asia (Cambodia, Indonesia, Malaysia, the Philippines, Singapore, Thailand and Vietnam), and South Asia (Bangladesh, India, Nepal and Sri Lanka). What is interesting is that there is no chapter on Japan. Lent explains that since there are so many books on Japanese manga, there is no need for a chapter on manga. However, the first chapter, ‘A Lead-Up to Asian Comics: Early Asian Visual Humor and Narrative’, explores the roots of manga in ukiyo-e (woodblock print). Still, the shadow of Japanese manga permeates throughout most of the chapters – the influx of manga titles into the Asian comic market since the 1980s and the strong influence of manga style among comic artists in countries like China, Taiwan and Thailand since the 1990s. I experienced this first hand when I conducted comic research trips to Hong Kong, Vietnam, Indonesia, the Philippines, and Malaysia. For more on the impact of manga in global comics, one can look at Comics Worlds and the World of Comics: Towards Scholarship on a Global Scale (Global Manga Studies, Vol 1), edited by Jaqueline Berndt, published in 2010.

Lent’s organizing method is the country approach, which he favoured for two reasons: ‘each country is distinct culturally, linguistically, and politically’, and ‘to lump countries together thematically would integrate them in ways that are neither realistic nor appropriate’. However, one can argue that Lent could have used both the country and thematic approaches in this book. There are some countries with similar histories that could have benefitted from a historical-thematic approach such as Singapore and Malaysia, China, Taiwan and Hong Kong, and Vietnam and Cambodia, or even Malaysia and Indonesia. A comparative approach outlining similarities and differences between these countries would have been enlightening and engaging. There is also a need for a chapter on the increasing number of female comic artists in Asia, which, to his credit, Lent has highlighted in his ‘Introduction’. For that, one has to look at ‪International Perspectives on Shojo and Shojo Manga: The Influence of Girl Culture‬ (edited by Masami Toku, 2015). There was also a special issue of IJOCA (13:2) from 2011, which had a series of articles on Southeast Asian female artists, exploring the themes and concerns.‬‬

Lent’s strengths is allowing the artists to speak for themselves – largely a phenomenological approach that emphasized on the lived experience of people who are in the comic industry – ‘it is essential to discover directly from those who lived through events what they know, believe and experienced’. Lent conducted about 400 interviews with Asian comic editors, artists, writers, publishers, festival directors, shop owners, critics, academics, officials, comic pirates and animators. Having read much of Lent’s writings, they are filled with details and what Clifford Geertz has termed as thick description. These interviews were conducted during the 60 trips to Asia that Lent made from 1986 to 2012 – all handwritten down in those A4 yellow writing pad that Lent uses. I remember them fondly when we first met in 1992 and again when he interviewed me in Singapore in 2000. We last met in Singapore in 2011 and he was still using the yellow writing pads. He must have a lifetime supply of them.

The mass communications approach employed by Lent focuses on the artists and industry (sales and distribution), which is very educational for any newcomers as it provides both historical and contemporary overviews of Asian comics such as the two waves of pirated comics in China’s comic industry in the 1990s and 2000s. If there is something lacking about this approach, it is that it could have discussed more about the aesthetics of the different Asian comics, what makes them ‘work’ or to even explore whether there is such a thing as an Asian aesthetics in comics. But as Lent made clear in his ‘Introduction’, he saw himself as a ‘gap plugger’, to fill this hole in comics scholarship about Asian comics. It is meant to open the door for other comic scholars to go deeper into the topic and explore other areas. In this aspect, his work is groundbreaking and backbreaking – an almost 30 years effort that sees a professional in his late 70s (accompanied by his wife-fellow researcher, Xu Ying) flying all over Asia to get the untold stories of Asian comics.

Such an approach allows Lent to work fast, literally flying into a country, interviewing people (‘snowball approach’ of meeting one cartoonist would lead to another), visiting studios, offices and shops, and flying to the next research site. Having focused on the comic art of Southeast Asian countries like Indonesia, Malaysia, Singapore and the Philippines in recent years, my own experience in research shows that repeated visits is necessary, especially to the different cities of a country like Indonesia. The comic scene of Jakarta is very different from the one in Bandung, Jogjakarta and Surabaya. The same goes for the different islands of the Philippines. A single research trip would not reveal the full nuances of a country’s varied comic scenes – there is no one comic scene, but many.

Often, Lent was at the right place and right time to interview many of the pioneers of Asian comics such as Tony Velasquez (the Philippines), Hua Junwu, Liao Bingxiong, and Ding Cong (China), many who have passed on. He had managed to save many original art from being thrown away as well, a sad fact about the disposable and ephemeral nature of comics in Asia. It is unfortunate that Asian Comics is printed in black and white. The sample artwork could not show the full diversity and colors of Asian comics.

Asian Comics is indispensible as a primer, a route map into the worlds of Asian comics. Long may John Lent run.