77 Star, the Japanese company that’s being bringing otaku-culture education & training to Singapore, has another programme up the sleeves: The First Manga Artist Challenge Contest (マンガアーチスト チャレンジコンテスト)! 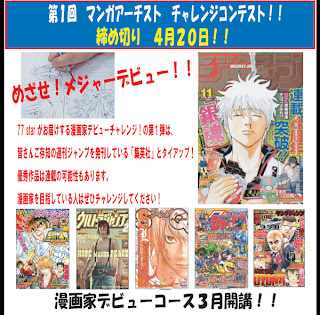 77 Star has tied up with publisher Shueisha (集英社, the people behind Shonen Jump and the rest of the Jump-series manga) to discover new manga talents. The chosen ones will have their manga published in one of their monthly/weekly anthologies. For those in Singapore, wanting to break into the Japan manga scene, this is a great opportunity.

Read more about the contest here.
Posted by 0ne at 9:41 PM No comments:

Cheng Tju recently suggested to me that we need a mailing list to announce comics-related events. So, I've set one up on Google Groups. To subscribe, please visit:

Because Google owns Blogger, the moderators on this blog should be able to log into Google Groups using the same account (at least, that's what I've discovered I can do), which hopefully makes things more convenient for us.

Google Groups is similar to Yahoo Groups, but with an extra feature that I find very interesting -- we can set up public web pages which any member can update and edit. This means we can create something like a directory of artists and writers, and link out to to each creator's personal websites. This might be a good way to collaboratively document the existence of comics talents here in Singapore.

I have set the mailing list to allow posting by any subscribed member. However, I will moderate it to filter out any spam.

I hope the new mailing list can complement this blog and encourage more lively discussions and keep more people informed of upcoming events.

May 2008. IFS and Radical Publishing’s will be marking “Free Comic Book Day” campaign with the first issue of “Imaginary“. This comic will be distributed free* to patrons of comics retail stores. [Some retailers, especially those outside of North America, may charge a nominal fee to cover freight cost] So, do remember to remind your preferred retailer to place orders for “Imaginary #1” via this month’s Previews (May 2008 solicitation).

An account of the first two comics conventions organized in Singapore in the 1980s by Robbie Poh. He posted this on sgcollect.com after hearing about the new comics convention that is coming up in Suntec City in June.

Just a bit of history here:


Singapore had already hosted 2 Comics Convention in The Past.

We were expacting a crowd of between 500-1000 but in the end around 2500 showed up
due t o unexpected free publicity from Straits Times in their weekend section the day before.

There were people coming from all over asia, Malaysia, thailand and indonesia as well.


I think that convention may have "converted" over a lot of comic fans who are adults now
and also members of this forum.

The 2nd one was held at York Hotel and chaired by one of the committee members of the
1st Comicon, Lee Yen Peen.

He had the disctinction of bringing in both Mike Grell the the then fledgling new Marvel artist
Todd Mcfarlane who made guest appearances there and the various comics specialty shops.


It also attracted a very large crowd back then.

I tried to organise a 10th anniversary in 1996 in YMCA of Singapore but failed to get vendor
support and it was scrapped.

Now after 22 years... this comes about and it is truly nostalgic

I still am reading comics but also branched into toys, LDs, DVDs and radio control collectibles.


MY comics collection has since been "separated" from me for some hard cash to many
collectors over the past 2 years due to family committments but I still treasure the
pleasure of reading them.

Now we have many avenues to continue the comics reading passion thru library branches
and all the major bookshops have extensive comics section . Even the govt is encouraging
comics reading as they brought in Mark Waid and Gail Simone last year for the writers festival.

Chinese Cartoons and Woodcuts about Chinese Education in Singapore, 1955-1961

The original link didn't work for sometime. This should be okay now.

Chinese Cartoons and Woodcuts about Chinese Education in Singapore, 1955-1961

I've also corrected the link in the original post.
Posted by ct at 6:06 PM No comments: