Niven Road's Evil Empire just had Drawing King, a contest where artists battled it out with markers on OHT to win a 2m long pencil.

Sounds like Quick Draw!, the panel hosted by Mark Evanier every year at San Diego where Len Wein and Peter David compete for the throne for the fastest draw in the West. And it just happened over the weekend too.

Was reading Cartoon America which I bought from the Library of Congress back in 06.
The public libraries here are a good way to educate yourself about the classic strips.

And also more ones like Bloom County and Doonesbury.
Saves you alot of money too. At least I know where some of my taxes are going.
Posted by ct at 9:42 PM No comments:

Too many things happening in Singapore. (but we still find it boring)

I like this one. Ken Foo put it up on his blog last month.

The concept: One that which the creator, at the back of the first volume, happily (or proudly perhaps) proclaims that she thought of at the last minute.

I have nothing positive to say.
Posted by Hilary at 3:39 PM No comments:

This comic is rated A for Adults.

The Human Torch knocks up a girl he met at a party two months ago and she comes knocking with news of the arrival of Johnny Storm Jr. They were drunk, they had a good time and the Human Torch can't remember the details.

What a great idea for a Fantastic Four Annual.

Of course, it's all a ruse by a super villian and all's well ends well.

"A person with no academic qualifications can be an intellectual if he utilizes his thinking capacity and possesses sufficient knowledge of his subject or interest."

Review: It Takes A Wizard

It Takes A Wizard (Gomanga) is an American OEL manga. How was this manga? I have no idea how to put it nicely.

For one, there are some interesting concepts behind the story. However, it is not well executed. The story begins with a mission briefing and we are introduced to the protagonist, Isaac Silverberg who is as generic as anyone can get with manga designs. In fact, all human characters are generically designed (although competently drawn), and one dimensional in characterization. Who is the Midnight King? Not important, because the comic will tell you little about him. May be he is supposed to be mysterious? There are better ways of executing mystery than this.

Now I explain further why the work can be seen as amateurish. Firstly, the story is set in a region of America that has been devastated by the Midnight King and his fantastical creatures. So it is post-apocalyptic all around. I have no idea whose decision it was to clutter panels with so many objects. This amount of detail and objects may be good for comics with colour, but for black and white manga with art lines that vary little in thickness, it is not very pleasing. Look at Bone in black and white, and you won’t see such cluttering in panels as often, especially in action sequences.

So may be the writer of this manga has put more effort to developing themes and such. In chapter five, there is one half page panel where Isaac is told by another character that death all around him. The panel's background is filled (cluttered) with plants, roots, and water flowing. In the focus of this panel is water flowing. I am unable to find any reference to water being a symbol of death. All I know is water symbolizes life in Japan, wisdom in Taoism, purity in Christianity and so on. Water as a symbol of death and destruction, none. Not even through google. So may be the writer had some idea in his head that is unfathomable to educated audiences. May be the story is superficial, and there is no need to read deeply at all.

The manga, with a great concept behind it, is marred by a story not well developed, and panels that, though figures and objects are nicely drawn, are sometimes too cluttered and thus visually irritating.
Posted by Hilary at 11:26 AM No comments:

"Here's one I'll not be able to use on the radio. It is a whit embarrassing to admit it to sophisticated young persons (read 'dirty little bastards' throughout) such as yourselves, but I retained my virgin status until I was well past my twenty-one birthday. You should have seen my wrists though - like pillars of mighty oak. I was unbeaten at arm-wrestling for 7 years."

Listening to the Pixies' Gigantic on my ipod recently reminded me of specially ordering Surfer Rosa from Valentine Music at Paradiz Centre in 1988. I heard John Peel playing it and I just had to get this record. It was sold to me 'under the counter' because the cover was a topless woman. Ah, the dark ages of the 1980s. Valentine charged a premium for this 'underground' music. 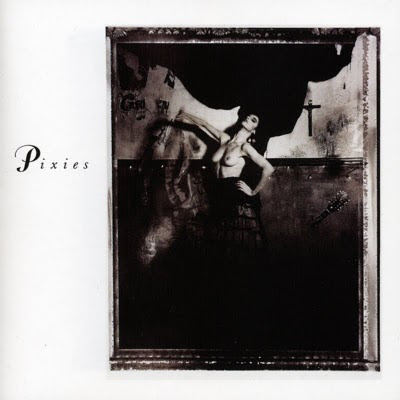 I taped it on to a cassette to listen to it on my walkman. And when the batteries are dying, the speed of the music slows down. It's like some blackmasking being done. But I kind of like it. Just like Butthole Surfers' Locust Abortion Technician (1987). One of the tracks required you to switch from 33 1/3 to 45 and back. 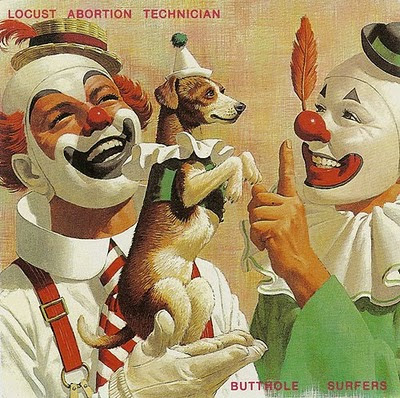 http://blog.cleveland.com/metro/2010/07/cleveland_comic-book_legend_ha.html
Posted by ct at 7:35 AM No comments:

Good Dog, Bad Dog (David Fickling Books) by Dave Shelton, is a feature of a British comics magazine for kids, known as DFC. As of this writing, after 43 issues, the magazine was cancelled. However, plans are to collect certain features.

This first volume of the above mentioned feature contains three stories. It is, as the publisher puts it, a “noir adventure comedy”, set in a world of anthromorphic dogs. Being targeted at kids, the stories are simple. As such, the comic does not shy away from the matters of death and murder.

The comic utilizes lots of physical and verbal (British) humour. The slapstick is outstanding, and is perhaps the most creative part about the book. The characterization is a bit more clichéd, being based on noir conventions, but still very well done. A nice detective is partnered with a no-nonsense type, each requiring the other to solve cases.

For adults the book provides a wonderful insight into brilliant slapstick comedy, and with that a must read, especially if you are unable to get your hands on the films of Charlie Chaplin and Buster Keaton.
Posted by Hilary at 11:27 AM No comments:

Watch this space for more details (book launch/events, meet the artists, etc).
Posted by ct at 7:01 PM No comments:

"The greatest pleasure in pop music derives, I believe, from the manner in which its very nature resists scholarship. There have been, needless to say, many attempts at scholarly pop books but most have been either outrageous hagiographies or absurd displays of pomposity. Those that have succeeded have done so because of the excellence of the writing rather than the importance of the subject matter. Pop is a car-boot sale, a parade of trinkets, junk and handicrafts. most worthless, some capable of giving a few moments of pleasure, with a few glorious items made more glorious by their unexpected appearance in this market. Then, in an unpredictable double-bluff, the worthless can, within a few years, take on great worth and the glorious become merely laughable." (p. 329)

"I'm going to tell you about a new recording of such strength, energy and real beauty that to me it represents the first break-through into history that any musician has made." (p. 421, talking about Tubular Bells)

There really is no good reason why I like comics. For one, I could have chosen literature. But compared to films, comics would be a better choice because in Singapore, access to films is very limited. For example, we don’t get Shaun of the Dead or The Aquatic Life of Steve Zissou in cinemas. So what if the censorship board tones down its censoring further. Marketing forces will keep films out of here, including censorship friendly films. Crappy Hollywood films fill the cinemas around the world. Thankfully, Kinokuniya imports all kinds of comics.

Someone said to me over the discussion board that Singaporeans will ultimately wise up as to what they are receiving, that they will know what are good comics when they see it. I disagree. Seeing how corporate commercialism has such a hold on Singaporean youths, I doubt swaying their interest is possible unless one has sufficient marketing power or is the government (even the government has difficulties).

As a comics blogger, sometimes I wish for a bit more recognition. But really, it is not within my power to have it so. Working in this field is clearly not rewarding. Still, interest is interest. Life is short; do what you like.
Posted by Hilary at 12:33 PM No comments:

Mercury by Hope Larson utilizes mysteries as its main hook. The mystery of how a pendant ended up with the Fraser family, the mystery of Asa Curry and so on. The book, with its historical and modern settings in parallel to each other, goes from being a simple tale of teenage life, to a darker one with supernatural elements involved.

The resolution is not detailed but is sufficient to allow readers to come to conclusions with regards to the main plot, while leaving a few mysteries left to imagination. Mercury is an enjoyable book, with a nice twist to the ending. Going back and forth between the timelines kept me wondering how they are connected. The good characterization keeps the story from being boring, especially when the resolution is far away.
Posted by Hilary at 1:06 PM No comments:

After having read so many western and Japanese comics, I have developed preferences. This is also why I have a tendency to put down local comics that that try and fail to imitate foreign comics. If I see a manga that lacks to have a local touch of culture, I expect it to have a strong Japanese cultural influence. There is no such thing as art with no cultural.

There are people like The Kuppies and Otto Fong, who have done very Singaporean things. Even if the quality of Mr Kiasu is truly terrible compared to Watchmen, it is borne out of your own culture. Because of this, comparing Mr Kiasu to comics steeped in American or any foreign culture can be argued to be unfair.

I like local comics with Singlish. It makes them so much more realistic. May be I am fascinated with Singlish due to my poor command of it. But since most home-grown locals speak it every day, I would expect local comics featuring Singaporeans to do the same. How can we ever have our own local title of gritty, realistic comics without Singlish or any other cultural aspect that defines us as Singaporeans?
Posted by Hilary at 2:30 PM No comments:

3. WORLD OF WARCRAFT: MAGE
by RICHARD A. KNAAK, RYO KAWAKAMI

8. WORLD OF WARCRAFT 3
by WALTER SIMONSON

10. BATMAN AND ROBIN: BATMAN REBORN
by GRANT MORRISON
Posted by ct at 11:58 AM No comments:

Logicomix: An Epic Search for Truth (Bloomsbury) is a graphic novel about the life and struggles of Bertrand Russell, with the foundations of mathematics and logic, as well as society. The novel is not an accurate historic account, taking creative liberties to allow for drama. In addition, the book provides an introduction to modern logic, both mathematical and philosophical, and the people who built its foundations.

As a comic, it is highly readable. Drama and humour are plenty. The logic ideas are quite easy to follow. Interspersed within the main story are self-referential scenes that explain the ideas of logic as well as the novel itself. For a comic about a subject as dry (not for me) as logic, it is very enjoyable.
Posted by Hilary at 11:21 AM No comments: