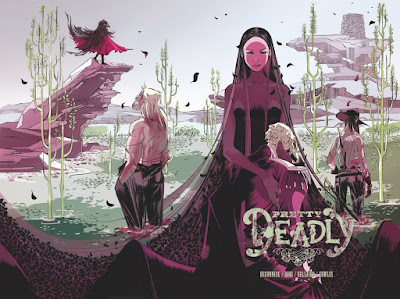 I first met Emma Rios at Thought Bubble in Leeds in November 2013. She and Kelly Sue DeConnick had just released the first issues of Pretty Deadly, their revisionist take on the horror Western, published by Image Comics. They had first worked together on Captain Marvel for Marvel and were fan favourites at Thought Bubble. There was a long queue for Emma’s sketches and she was spending easily 15 to 20 minutes on each sketch, talking to the fans in between. Her respect for her readers won me over. 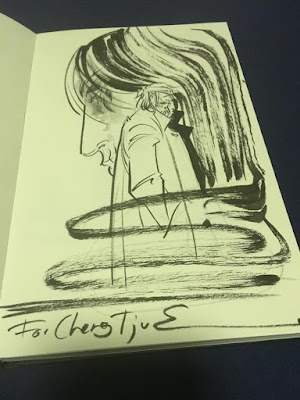 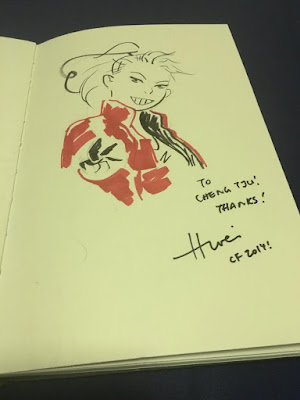 About a year later, I would meet Hwei Lima at Comic Fiesta in KL. I showed her my Emma sketch and Hwei gamely drew her own in my sketch book. Jump to a few years ahead and the two good friends have collaborated on a new comic series, Mirror (Emma writes and Hwei draws), again published by Image.

I managed to conduct an email interview with Emma ahead of her visit to Singapore as a guest of STGCC. She told me to edit her answers accordingly as English is not her first language. But I found her answers sprightly and I am leaving them largely as it is.


We talked about Singapore last year and you said you would like to come here. What made you interested in Singapore?
Food aside, I just adore visiting conventions, the furthest from home as possible.
Also, Hwei lives rather close and we don´t have the chance to meet very often. I thought it would be awesome to try to make the con together and travel a bit just after.

When I introduced you to STGCC and they extended an invitation to you, were you surprized?
Absolutely! I expected only huge names to be invited, honestly. I’m doing what I can, and I think I’m doing ok, but it’s true that I’m walking this path in between mainstream and indie comics and, moreover, Spain is rather far.

Your partner-in-crime for Mirror, Hwei from Malaysia, is coming as well. Tell us about your friendship and how guys met.
Hwei and I, both, got to know each other through comics thanks to a program called Lingua Comica, a workshop organized by the ASEF (Asia-Europe Foundation) back in 2008, in which a few cartoonists from Asia and Europe were invited and paired together to create stories. That year, the event was held in Japan due to the Kyoto International Manga Museum opening its doors, and having been part of it was one of the best experiences of my life. Of course my partner was Hwei then as well, and we did a 20 page comic together. 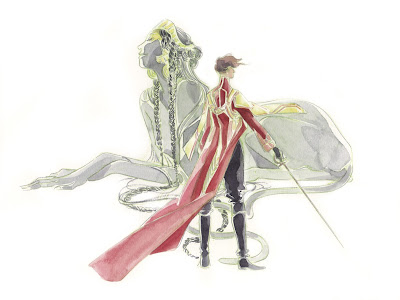 How was it like writing for Hwei? (the first time someone else is drawing your story)
On one hand, Hwei has been an inspiration to me since I first saw a page from her. Whether it is writing or drawing, everything she does is extremely nuanced with very little, and its beauty feels ethereal, like floating on the page. And when someone’s work feels from out of this world to you, only thinking about writing for her, writing something that could reach her, that could surprise her, definitely freaks you out.
On the other, if there is someone that can understand myself as an artist it’s Hwei. Because even if our styles look different at first sight, our priorities in terms of narrative and character work are pretty much the same. So, as a writer that always thinks as an artist, makes me feel safe.
Hwei and I know each other rather well at this point, and our relationship in Mirror as writer/co-writer and artist/co-artist is really tight. We are both really involved with the characters and the story, working really hard on it to make it wide and accurate; I wouldn´t change this feeling for the world.

My own reading of Mirror is that it attempts to be a new kind of shojo manga. What would you say to that?
That makes me smile but I’m tempted to ask you why, honestly. It’s true that some shojo manga stories from the 70s and 80s -people like Ikeda, Moto Hagio or Keiko Takemiya- are very inspiring to me. But at the same time, even if it starts with glimpses of a relationship between Sena and Ivan, I don´t think that LOVE, in capitals, in the sense of having a romantic interest, is treated as a main subject in the book.
That said, the story is definitely romantic in terms of depicting tragic heroes and the never ending conflict between Technology and Nature in my head.
Now that you mention it, I remember making a few jokes ourselves, and with Brandon, about 8house (the Image science-fiction series edited by Brandon Graham) becoming some kind of shojo sci-fantasy at the beginning of the whole thing ha ha... But none of the books intend to address a specific audience.
And I’m afraid Mirror totally turns into space opera in the second arc.

You worked as an architect. How has that influenced your work? (especially for Mirror)
Architecture influences me a lot in Mirror, specially figuring out the locations for the story. It’s Science Fiction, so you have to make almost everything up. Like the space ship Esagila and the Irzah colony. It’s as if I need to have the environments in which the action takes place clear in my mind before starting to write anything.
Aside from Mirror, when I draw I always think a lot using maps, and normally design all those spaces in which I’m going to make the characters move, as accurately as possible. I really spend a lot of time drawing backgrounds and trying to do tight world-building in general. 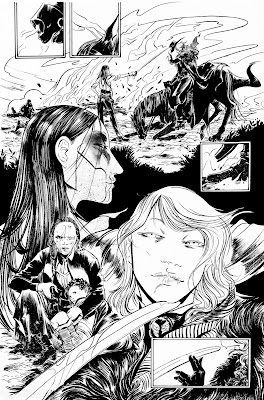 How was it like working with Kelly Sue DeConnick, Jordie Bellaire and Clayton Cowles on Pretty Deadly?
It’s very comfortable and fun. We’ve spent quite a long time working together already, so it feels like family.
Working with Jordie on colors is really interesting because even if we worked on a lot of books together at this point she always surprises me with crazy palettes and approaches to the narrative that make me think so much about what I do myself. It’s really rewarding.
Clayton, as letterer, respects my opinion so much, which I truly appreciate.
Kel and I are sisters for life. I love her so, so much. And she inspires me a lot at every level. 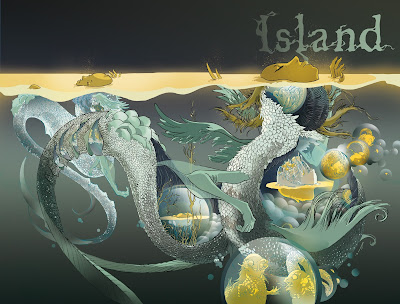 You and Brandon Graham seem to be on the forefront of a new wave of sci-fi / fantasy stories. How did Island and 8house come about? (both are published by Image Comics)
Brandon was the first one who came up with both ideas about three years ago, and I received them enthusiastically.
To me, they felt like building a safe haven in comics, a place to start, to experiment, to push yourself forward… and consequently, I didn't hesitate one bit in terms of offering myself to collaborate on them both.
The main concept for all these projects was having all the creators involved work with total freedom, and organizing their schedules to work comfortably, spending all the time necessary on their pages, so they could create beautiful work without pressure.
The American market still suffers from this monthly comics need, and that makes a lot of artists feel miserable due to deadlines and pressure.
I would like to think that nobody in Island feels this way.
8house started with the idea of becoming a shared universe built among several themes, but in the end, and precisely because of working with this much freedom, aside from sharing a similar feeling, the stories are all stand alone and independent from each other. Now, each collection has its own title, like Mirror, Arclight, From Under Mountains, Kiem, Yorris…

I read ID in Island #1 and #2 and that pause in the story between issues creates a different effect from reading it as a graphic novel in one sitting. Did the original serialization affect your structuring of the story?
I guess what affected me the most was doing it between arcs of Pretty Deadly. That made me try to simplify and make something pretty direct. A message, a tale…
I understand what you say, though. It’s true that it reads differently. But that’s because the first half of the book is a set up, and the second half a resolution I think you don’t expect by reading the first part. And also because I played a lot with the rhythm differently within the two halves; making it pretty frenetic at the beginning, distracting in terms of fake world building, overwhelming with overdoses of medical info and crazy decompressingly towards the end to try to develop the mood and the feeling.
It probably reads better as a whole, but I find the distraction between the first part and the other rather exciting in terms of having people building their own idea of the story in the middle .

I heard Hwei turn you on the historical Chinese drama series, Nirvana in Fire…
Haha, yeah… I saw some fan art she was doing and decided to check it out, just to end up incredibly hooked to it. I watched it twice, can you believe that? It’s sooooo gooooood. I wish I could read the novels... 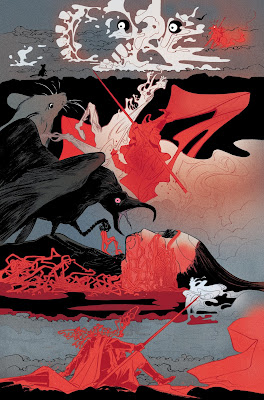 Any new projects coming up?
More Mirror and more Pretty Deadly for me in 2017. I’m crazy excited about the following arcs for them both. Best life ever, honestly.
I have another personal project in mind that I want to do on my own, like ID, but it won´t happen for at least one year and a half.

What is that one dish that you die-die must try in Singapore?
Oh man, I have no idea! But I’m looking forward to learning a lot about food on this trip. One of the things that has me more excited is the possibility of eating something different —I haven´t tasted it ever before— everyday.
Posted by ct at 2:52 PM No comments: