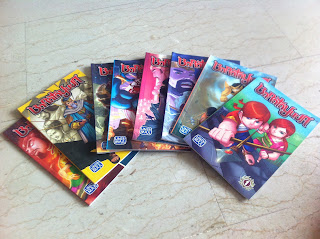 Will be meeting Chris Lie of Caravan Studio again next week at the Bandung conference, so here are some short notes based on the chat I had with him at STGCC last year.

For those who don't know, you learn more about Caravan from their company profile here.

I wrote about them earlier.

Caravan Studio can be considered a success story in Indonesian comics. They started out in January 2008 with only four in-house artists, but now has grown to almost 20 people in their studio. This does not include the freelancers they engaged. What is interesting is the model they are using in Indonesia, which is a studio system to create works for projects overseas. This pays the bills and allow them to hire artists to work on graphics and comics. They are like IFS (Singapore), which used to have a studio in Jakarta and Sunny Gho's Stellar Labs and Makko.

But doing projects overseas do not necessarily give you a presence in the local market/scene. That is something Caravan has rectified with their current Baratayuda series. So far, more than 10 issues are out. Full colour and good quality paper. It is based on the Mahabharata story, but aimed at the 6-12 years old market. Caravan knows they cannot compete with the manga market in Indonesia, so they decide to create stories based on their own myths and legends.

As to why they decided to use the Garuda, Lie said, "Garuda is popular, because it's also our nation's symbol. A mythical bird from the epics."

Lie has come a long way since growing up in Solo, and coming to Singapore to work between 2001 and 2003. He still has close links with Singapore as his brother works here. He attended Savannah College of Art and Design on a Fulbright Scholarship between 2003 and 2005.

One of the first Caravan projects was an adaptation of a classic Twilight Zone episode, Deaths-Head Revisited. It was published by Walker and Company in 2009. Lie did the storyboards and his team did the actual drawing and finishing.

Since then, Caravan has worked on card games illustrations for Legends of the Five Rings, Wizard of the Coast. They used to do the bestselling Return to Labyrinth series for Tokyo Pop before the latter went defunct in America. They have also done Scholastic Books like the Dinosaur Data Handbook.

Lie promises to announce a new project at the Bandung conference, so do keep a lookout for that.