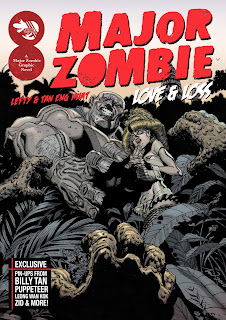 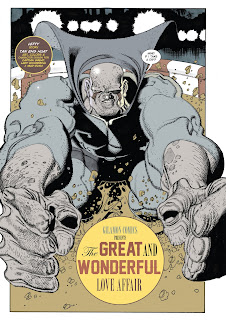 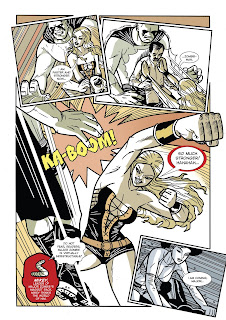 Here is part of the review by Brian Cronin:

Every day this month I’ll be reviewing a different independent comic , based on submissions from the creators of the comic books themselves.

The month continues with Major Zombie: Love and Loss, by Lefty and Tan Eng Huat, a real treat of a comic…

Gilamon Comics is a Malaysian independent comic book company founded by a trio of comic book artists: Lefty, Michael Chuah, and Chi Sau Lim. Recently, Tan Eng Huat (who has done a number of projects for and DC, including the very recent Thor: First Thunder series) has begun to work with them, as well. Tan Eng Huat draws the first of two stories in this magazine-sized, full-color magazine, while Lefty writes both stories and draws the second.

The gist of Major Zombie is as follows – a Superman analogue, Supreme-Man, gets turned into a zombie saving a young female adventurer. He has lost much of his original power, but he is still pretty darn powerful, and continues as a superhero known as Major Zombie, along with the female adventurer, Kaktus, as his sidekick (as obviously she feels indebted to him).

What’s interesting about this series is that Lefty, on his own, is a talented comic book artist. Here are a couple of his pages… (read the rest of the article here)

I'm involved in this. Do drop by if you are free.


I was told Spawn #200 was a world sell out as well.
Thanks to Bill Teoh of Comics World. He's been in the business for more than 20 years - salute!

Go buy your comics from them.
Posted by ct at 10:48 PM No comments:

6. NEKO RAMEN VOLUME 3: CAT AFTER ALL GN
by KENJI SONISHI

Nice to see Gone Case selling well. And now I know the 3rd vol of Neko Ramen is out. Cinderella is on the chart 2nd month running. Maybe I should check it out.
Posted by ct at 10:41 PM No comments: