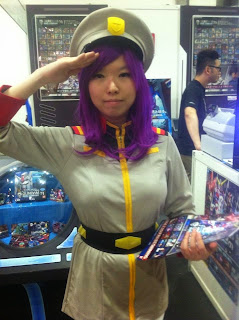 Singapore seems to have gotten more expensive. For fans who attended the 2014 edition of STGCC, the cost of attending the convention has gone up. This year, the cost of a VIP pass is $70 and it’s $25 for a 2-day pass. If you just want to attend it for one day, it’s $19. Prices have increased from last year.

Getting a convention sketch from the invited guests is not cheap too. According to info provided by SCK members, Humberto Ramos charged $125 for a b&w bust (head and torso) drawing and $250 for a colour one. David Mack, who also came in 2013, has kept his prices constant. $150 for a simple brush and ink and $300 for a detailed drawing. Harvey Tolibao has remained affordable and charged $100 for a convention sketch, which is value for money. As a comparison, regional and local artists were charging between $10-$20 for sketches.

This is also the first year that an artist, Ramos, was charging for autographs - $6 for any comic drawn by him but $20 for Amazing Spiderman #1. A local artist who queued up for Ramos’ autograph was surprised that he had to pay. But there were reports that Ramos would sketch and autograph for little kids for free.

For regulars at the Artists’ Alley, the cost of getting a booth has also gone up, which makes it harder for them to turn in a profit or breakeven. A recent article highlighted it’s more difficult for artists, even established ones, to cover their cost at conventions.

While I would not put the blame solely on cosplayers (as the article did) or the heavy emphasis on toys and games at STGCC, it could be a continuing trend for artists to charge more for convention sketches and to charge for autographs. In overseas conventions, you need to pay to have your photo taken with the artists too. This is following the norm of actors (especially Star Wars and Game of Throne) charging for autographs and photo taking. A friend paid top dollar for an autograph by Carrie Fisher at a London convention recently. 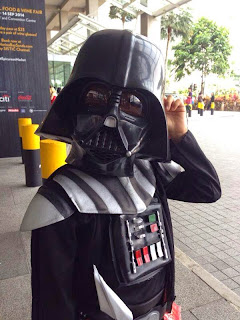 Still, STGCC, being the major comic event in Singapore, has something for almost everyone. Andy Price, the artist of My Little Pony, was there to appeal to the kiddies. For the rock fans, it was cool to meet Frank Kozik in person. And STGCC should be given credit for highlighting young and upcoming artists like Aaron Kim Jacinto from the Philippines, brought in through an arrangement with Komikon. Local artists are still turning up in force at the Artists’ Alley to hawk their wares such as Jerry Teo (Rex Regrets), Ray Toh ( www.fantasticfox.org ) and 24 Hour Comic Day alumnus, Benjamin Chee (Charsiew Space). Newcomer Shiuan was also offering her LKY Cosplay Prints, which were very popular. New science educational comic, JJ’s Science Adventure by former primary science Aurelia Tan, was an entertaining read done in a style reminiscent of Osamu Tezuka.

Books Actually has gotten into the comic book publishing act through their Math Paper imprint. But fans would have noticed that the latest volume of The Resident Tourist is more costly now as compared to a few years ago, which is the reality of publishing in Singapore today. At other fronts, it is encouraging that local and regional comic shops are making an appearance at STGCC, other than regulars such as GnB Comics. This is the first year that Comic Odyssey (the Philippines) and Atom Comics set up booths at STGCC, offering new and back issues of collectibles. Hopefully it was worth their while for them to come back next year. A representative of CGC Comics was also at the con to offer advice to collectors.

Despite its commercial leanings, STGCC is still that once-a-year occasion that you catch up with old friends and make new ones. Sales may not be great for some artists, but attending the con was a way to connect with the local and regional comic community. It was good catching up with Andie Tong (who has a new comic written by Stan Lee), Leong Wan Kok of 1000tentacles, Chris Lie of Caravan Studios (who came with his studio and an impressive range of books) and Lefty Kam (Gilamon) for that annual beer outside the convention hall. And it was great to meet some of the Singapore Comic Kakis who launched their inaugural newsletter, put together in time for the con.

I did a few interviews with the invited guests of the con. These are some of the choice quotes from the sessions:

I’ve been living in LA since 2005, and before that we were living in San Diego. Basically you still need to be out there to network and have that human connection with the editors and writers. If you just stay on in your home country, you might be pigeonholed by the DC or Marvel editors as outsourced labour. My advice is that you need to solve problems for others to prove that you are useful to the people in the industry. You need to see the whole bigger picture of how you can build your career.
- Philip Tan on drawing for mainstream comics as a career. 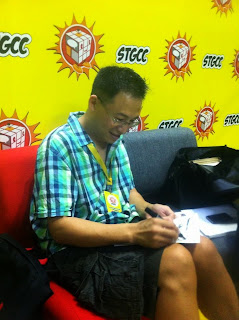 The best thing is that you get to connect with the people who support your work, the fans. The worst thing is the food. Convention centre food is not very good. And you are tired from the jetlag.
- Humberto Ramos on the best and worst thing of attending overseas conventions. 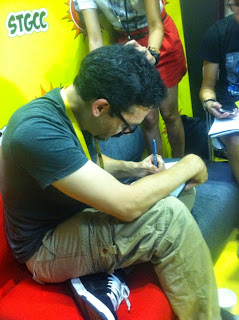 I don’t like it, the extreme violence. Comics are meant for kids. But I felt it was my duty to draw it. That’s a good question. Maybe I should have discussed with the writer and editor.
- Olivier Coipel on drawing that infamous double spread of the Sentry tearing Ares apart in Siege #2 (2010), with the entrails spilling all over. 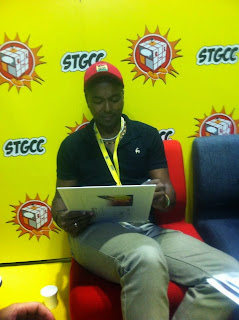 I have always created the characters that I drew, keeping them true to character. So drawing Daredevil: End of Days was fun. That spirit of collaboration with the history. It was not a constraint, but a challenge to be creative. Doing different things energise me. By the way, there will be a sequel, Punisher: End of Days.
- David Mack casually breaking the news of a sequel to the popular Daredevil: End of Days (2012). 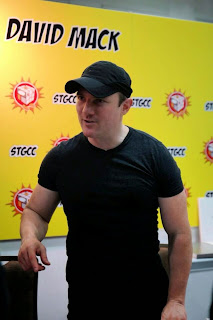 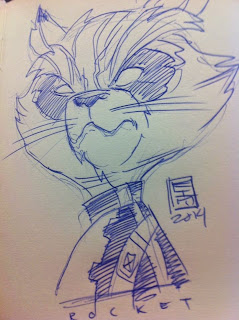 Thought Bubble at Leeds and TCAF at Toronto.
- Cameron Stewart when asked about which are some of his favourite comic conventions. Maybe STGCC will make the cut one day. 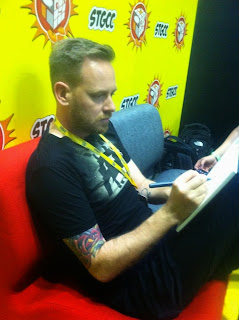 This is my first time out of the United States. I just got my passport two weeks ago.
- Andy Price thanking STGCC for giving him the opportunity to travel overseas. 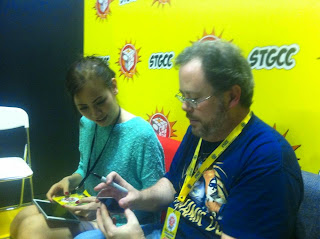 I used to dislike ‘pop culture’ because it was associated with famous people and it is commercial and seen as selling out. But I’ve come to realise that pop culture is about connecting with people.
- Alex Solis on pop culture. 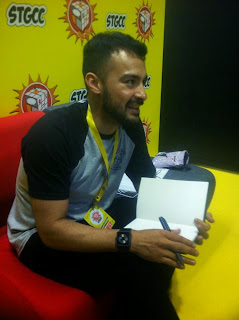 Don’t do it. You don’t have a health plan and you don’t have a pension. It’s tough competition. I was lucky I started before the internet. You are better off being a doctor or engineer. But if you still want to be an artist, don’t go to an art school. It’s fucking expensive in America and they don’t teach you anything. It’s bullshit. Just drop out of art school and use the money to rent a workspace and buy yourself tools.
- Frank Kozek when asked what advice he would give young artists.

See you next year. 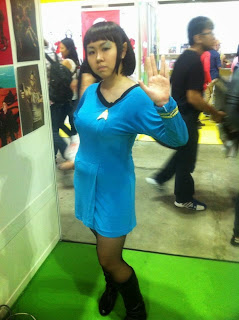 http://www.seaartsfest.org/southeast-asian-comics/
Posted by ct at 9:05 PM No comments:

The Comic Collector in Singapore

Like Superman and Spiderman, the comic collector in Singapore can be elusive.
Some of us have wondered who is this person. Does he or she have a secret identity like the superheroes? Even for the bestselling titles, newspaper reports would only give rough estimates based on ballpark figures provided by comic shops or booksellers. A few years ago, I compiled a monthly list of bestselling graphic novels provided by the bookshops on www.singaporecomix.blogspot.com . But it was not possible to get firm figures. Less is known about the comic collector who buys the comics. This is an attempt to find out from who is the comic collector in Singapore.

A questionnaire was put up on the Singapore Comics Kaki (SCK) facebook page on 16 August and a few other sites. Replies were received till 26 August. 13 males and 1 female responded. While recent US reports claimed that there are more female readers, this may not be the case in Singapore. What is quite clear, however, is that most of the respondents are in their 30s-40s, which meant they are quite serious collectors and have the buying power to purchase collectible back issues, especially the Silver Age titles. What was surprising is that even with this small sample size, two respondents listed Incredible Hulk #181 (1974, first major appearance of Wolverine) as one of the valuable comics in their collection. My sense is that this is a group of collectors who grew up reading comics and is now able to afford to re-buy rare titles from their youth, either for pleasure or profit. A few of them hold senior positions and might be travelling for their job, giving them the opportunity to buy CGC graded comics. The internet has also made mail order and online auctions easier. A few of them sell their collectibles to other fans in Singapore. However, this does not mean an emergence of a back issue market in Singapore. One suspects such ‘big time’ collectors are still far and few in between, and most likely they would buy their expensive comics from overseas.

Respondents also confirmed what some have observed for the last few years – collectors are buying their trades from Kinokuniya (especially when there is a 20% sale) and a few of them have stopped buying single issues from the comic shops. However, there is still a handful who will make that weekly trip to the comic shops on shipment day. Their ‘strategy’ is to buy the singles from the comic shops and to buy the trades at Kinokuniya. Increasingly, there are some who buy their trades from Amazon or Bookdepository because of the deep discounts offered. There might be a need for comic shops and bookshops to organise more events (eg. signings) as incentives and outreach, and to build a community.

The good news for the shops is that the mainstream titles are still the most popular. Most respondents considered themselves as fans of DC, Marvel and Image comics. Only a few listed independents like Fantagraphics or First Second. This corresponds with their favourite comic book adaptations – recent blockbusters like Guardians of the Galaxy, The Avengers and Thor. Attempts to find out how much comic collectors spent on comics per month is not conclusive as some left it blank. Those who did answer put between 10-20% of their salary, but some are single digit %. For those who gave actual figures, some collectors spent about $100-$200 per month on comics. But most of them collect other things like Lego, toys and original art, so the amount they spent on pop culture memorabilia would be higher.

What comes across is the sense of enjoyment they receive from reading/collecting comics. Some of the anecdotes talk about how they were introduced to comics and it is a link to their childhood. “I read comics because my cousin sent me a box of Marvel comics when I was 8 years old, and I never looked back.” Another said, “I was introduced to it by my late father when I was 5 years old… I do not collect for the sake of collecting or selling. Every comic I own, I read.”

It is encouraging that as a result of FB groups like SCK, more comic collectors get to know each other to exchange information about their passion. Friends are made through comics.

Singapore Comics: when autobiography is mainstream

There are other articles in this issue too.

http://kyotoreview.org/issue-16/current-trends-in-singapore-comics-when-autobiography-is-mainstream/
Posted by ct at 11:35 PM No comments: