The Art of Ian Kennedy 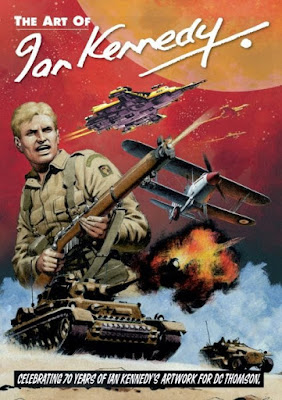 In his new book, Masters of British Comic Art (Rebellion, 2020), David Roach described Ian Kennedy as “perhaps the most important artist at Air Ace (for Fleetway) where he drew strips and painted covers for nine years, meanwhile at Thomson he crafted light-hearted girl strips for Judy and Bunty, mixed with boys strips for Hotspur” in the 1960s.

Roach went on to say the 1970s and 1980s consolidated Kennedy’s position as “one of the country’s top adventure artists with crisp, dynamic strips for Wizard, Warlord, Bullet and Crunch along with IPC’s Valiant, Battle, Starlord and Eagle where he memorably drew Dan Dare for several years.”

Kennedy’s work is characterized by energetic drawing, beautifully crafted ink work, a mastery of paint and a gift for bringing anything mechanical to life, all of which has been thrillingly evident in his long association with Commando which began in 1970 and continues to this day, resulting in over 1,200 exquisite covers. (p. 55)

Now that makes Kennedy the link between the pioneering postwar generation of British comic artists (he started his career in 1949 at the age of 17) of the 1950s and 1960s and the new wave of the 1970s and 1980s. Kennedy was one of the few who successfully transited to the adventure and science fiction strips of the 1970s and 1980s, and still working today. He even drew Judge Dredd in the mid 1980s, although he didn’t quite approve of some of Joe’s more violent punishments.

But it will be his Commando covers that will stand the test of time. In War Stories: A Graphic History (Collins Design, 2009), Mike Conroy praised Kennedy’s ability to draw a seemingly simple action scene but in actual fact, the cover is a master class in balance and design (p. 109).

Now, wait. Some of you are asking Ian who? Ian Gibson? Cam Kennedy? If you are unfamiliar with British comics history, now is the time to brush up on its rich heritage other than the writers and artists that most of us only know when Alan Moore, Neil Gaiman, Brian Bolland, Dave McKean and others invaded American comics in the 1980s and 1990s. A good place to start is the above-mentioned David Roach’s Masters of British Comic Art, a hefty hardcover tome of 386 pages. 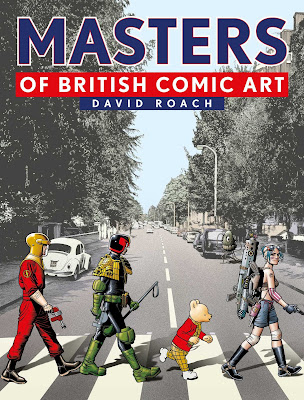 Growing up in Dundee in the Forties, Ian was enchanted by aircraft. An ear infection ended his dream of becoming a pilot, but a trip to Dundee Royal Infirmary led to meeting his wife to be, Gladys, who was a nurse and he pursued a career that involved drawing aircraft rather than flying them.

Ian started at D. C. Thomson & Co. in 1949 as a trainee illustrator, and in 1954, with a wife and son to support, took the decision to leave D.C. Thomson and go freelance. He has had a career in illustration and comic books ever since.

During the 1950s Ian turned his hand to illustrating anything and everything. His work appeared in Hotspur, Rover, Adventure, Sun, Buck Jones and many other comics.

In the 1960s the Picture Library became a popular format and Ian worked on Air Ace, Bunty, Battle and War Picture Libraries. That's not to neglect the work he did for many of the weeklies such as Adventure, Hotspur and Bunty.

For those of us of a certain vintage, we grew up reading his Commando stories and Dan Dare in Eagle in the 1980s in Singapore.

I did an email interview with Ian recently. He still lives in Dundee. 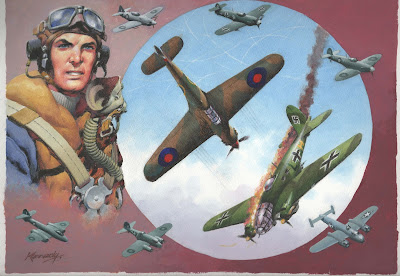 My typical day is much less structured than in previous times when, the only way to cope with a heavy workload was a strict daily routine of roughly eight hours with a break for lunch and, to a degree, relaxing in the evening. Now, as I do not have to meet so many deadlines, I am more relaxed as to when I go to the studio, which, I feel, has led to, in some aspects, an improvement in my work.

I am not much of a sports fan, although I do enjoy tennis, bowling and snooker on TV.

How is your health these days?

I have enjoyed a fair measure of good health over the years. However, since contracting prostate cancer 10 years ago, my health has deteriorated to quite a degree, mainly due to the chemotherapy which, although successful in treating the cancer, has had drastic side effects.

You had wanted to be a pilot when you were young. When was the last time you took a plane and where did you travel to?

Yes, that was the burning ambition, sadly not to be! Last flight was a short one - Edinburgh to Belfast return!!

What is heroism in this time and age?

Heroism? I believe it manifests itself in all walks of life. Disregarding one's safety for that of others, might well be considered heroism.

Are characters like Dan Dare and Judge Dredd still relevant today? (this year is the 70th anniversary of Dan Dare)

Dan and the Judge relevant today? I really do hope so as I make a living out of portraying them! 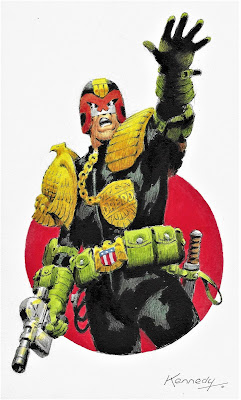 A bit of a dilemma here. Although earning a living portraying war, I find the very thought of mankind going to war totally abhorrent, especially when it is, frequently, to further the aims of politics or religion.

You drew many science fiction and futurist comics. What are your hopes for the present and future?

I consider Scifi and Fantasy publications to be the natural successors to the traditional Fairy Tale and, therefore, hope they will continue, with one proviso. In recent years, there has been a proliferation of the grotesque to the exclusion of all else. I feel we can do without this unnecessary trend! 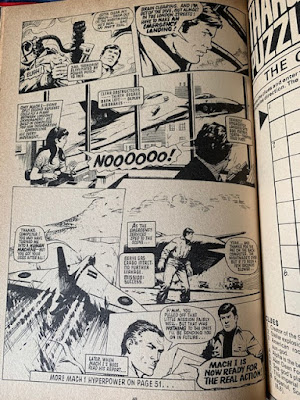 Do you still read any comics today? What about books, music, movies or plays?

I do glance/examine current publications including those for children, especially for the ones in their middle age! That apart, I do not do much reading of books as I tend to doze off, having then, to reread that last paragraph - very boring! I enjoy TV documentaries and music, especially DVDs.

You are still making appearances at comics conventions and events like the Lakes International Comic Art Festival (2018), the 40 Years of Thrill-power Festival (2017), a celebration of 2000AD and the launch of your own art book, The Art of Ian Kennedy, published by DC Thomson last year. Are you seeing a revival and reassessment of your career and now more famous than ever than?

I took some persuading, mainly by my friend Phil Vaughan of Duncan of Jordanstone Collage of Art and Design at the University of Dundee, to attend some of the local conferences. My reluctance was based on the belief that all I had done was earned a living, like so many others, using a talent I was lucky to possess. I soon realised that I was part of an industry providing entertainment for many members of the public of all ages. I, very quickly realised, that having had such an interesting and rewarding life in comics etc, there was an opportunity to put something back by making myself available to discuss, for instance, my "apprenticeship" among the unsung professionals in the Art Department of D.C.Thomson & Co. Dundee. The knowledge I gained then has proved invaluable, and has played a great part in any subsequent success that has come my way. As for the "fame" - I must admit, I find it, at times, somewhat difficult to cope with as, although I enjoy company, I am essentially a bit of a loner which is rather fortunate in that I have never had any trouble in spending many solitary hours in the studio.

How do you explain your longevity?

I can only put my longevity down to sheer luck in having my wife Gladys look after me all these years, ensuring a healthy diet and, most of the time, ironing out the creases in life. In addition, it must be noted that apart from my talent, I have been extremely fortunate in that my professional life coincided with what I term "The Golden Days of British Comics" when there was no need to search for work.

What do you think about the fact that comics are taken more seriously now and are given more respect and research? (there is a Scottish Centre for Comics Studies at the University of Dundee, which offers a Masters in Comics and Graphic Novels, the only course of its kind in the UK)

The recognition is long overdue! I mentioned earlier, the artists in the department at Thomson. Each one was a talented professional who, today, would get the recognition they richly deserved. Along with many others around the land, they laid the foundations of comic illustration as we know it today. You mention Dundee University's interest and initiative in the world of comics. I am rather proud to be connected, albeit only in a very minor way, in that from time to time, Phillip Vaughan, the Senior Tutor invites me to meet and talk with the students on that particular course.

Are you working on any new projects?

I am fortunate in that I am still contributing covers for Commando combined with commissions mainly from private individuals. This is more than enough as I now find it difficult spending more than three to four hours at the drawing board. At present, there are five commissions and a cover awaiting attention.

Can you show us some work in progress pages or art you are working on?

I prefer, out of respect for my clients, not to publicise current work. However I shall attach some of my recent efforts. 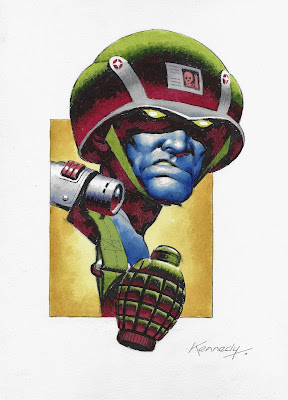 
One could say that other than being bloody talented with the pen, Ian is also lucky to be at the right place, at the right time. From being the tea boy and doing up the crossword in the DC Thomson office in the late 1940s to drawing adventure and romance strips in the 1960s, and cementing his contemporary reputation as one of the pioneers of 2000AD and his long time association with Commando, Kennedy is one of the few postwar giants of British comics still with us today. Younger readers should read more about his work and learn from him. That’s why I wanted to do an interview with him.

There are still new areas to research for his comics. His war stories would have been studied but given the interest in early romance comics in the UK, Kennedy’s girl strips for Judy and Bunty are up for a reevaluation. 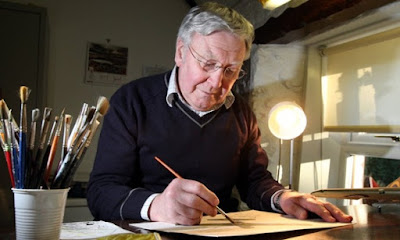 I did an interview with Calum Laird, the editor of Commando comics, back in 2015.

Thanks for doing this great interview and providing us with roadmaps for life, Cheng Tju & Ian!