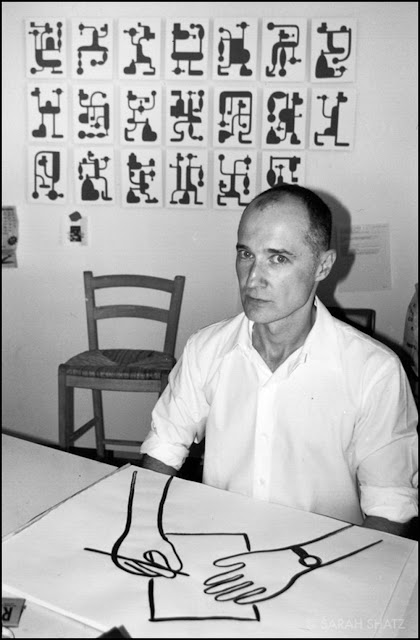 Most people in Singapore would not have heard of Richard McGuire or his groundbreaking story, Here, in RAW. Nor would they know that he was in the seminal NYC No Wave band, Liquid Liquid, in the early 80s. They were best known for their track, Cavern, which was covered by the Sugar Hill Records house band as the backing track for Melle Mel's old school rap classic White Lines (Don't Do It). You may have heard the Duran Duran version of White Lines.

That is why it tickled me to no end that McGuire is being invited to Singapore for the Illustration Arts Fest later this month through OIC's partnership with NoBrow. An odd choice but I am damn pleased that McGuire is coming, someone so left field which is what we need. And if you need more convincing, the expanded Here (300 pages!), originally published by Pantheon in 2014, won the Gold Prize for Best Album (French edition) at this year's Angouleme Comic Festival.

I emailed him some questions and here are his thoughtful replies.

Did you expect 'Here' to have such longevity? What is its 'staying power'?

When I made the first six page story, I could never have imagined that it would have had the impact that it did. It’s been twenty five years since the original was published and I’m still being asked about it. I think the story, or the concept of ‘the passage of time’, is something everyone can easily relate to.

What do you think is the legacy of 'Here?

I don’t know, that’s not for me to say. One thing I do know is that the non-linear way it works may be closer to ‘new media’ than to a traditional narrative. It’s very fluid, you can open the book at any point and jump in, it doesn’t really matter where you enter or exit. This kind of narrative is more ‘experiential’ than a traditional narrative story arc. 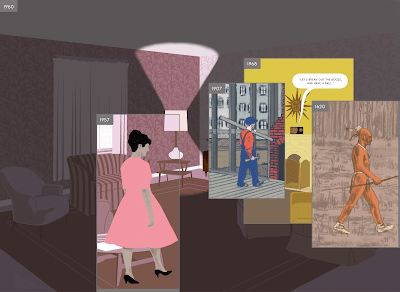 What made you want to do 'Here' the graphic novel?

I had the idea to make it into a book about ten years after the first strip was published. Then it took another fifteen years before the book was realized. Not that I was working on it all that time, I was involved with other projects, directing animated films, designing toys, etc. I always thought the concept was worth going deeper into, something deeper emotionally and also with history. In theory the concept is infinitely expandable, it would be as deep as I was willing to go. I chose a three hundred pages because that felt substantial. I also decided to use an actual location and I chose my family home, so then it became more personal. I did a year of research on that area before I made any serious attempt at the artwork. It needed that foundation before I could start to play around with it. Right before I started to seriously focus on the project I faced some family tragedies. My mother, my sister, and my father all passed away, all within a short time. My parents had been living in the house where I grew up for fifty years. The process of going through everything in the house in order to sell it brought back many memories, it helped as part of the grieving process, but also became part of the research. I used a lot of family photos as reference. The experience set the tone of the book, the idea that life is short, and to appreciate the moments we have. My family is at the center but the scope of time is so vast, I show the formation of the planet and deep into the future. In context our lives are all just tiny blips in time, it can be humbling.

To me, the original 'Here' taps on the synchronic strength of the comic medium - we see six panels (and more) in a single page at one glance and then we start reading the individual panels in 'order'. I find that I could 'read' the panels across, and up-down to come up with different stories and flow. (much like Steranko's Frogs)

Yes, In the original strip there were six panels per page, each with the complete view of the room, and of course including many smaller panels. The reader can scan the information, and make connections much faster in this format. It was also more of a formal exercise. It’s not a real location, I wanted it to be a sort of ‘any-place’ so the reader could feel that it could be their own home. Even the choice of style was very generic, on purpose, it was to read very ‘deadpan’, very clearly, like an instruction manual. With the non-style I felt more could be projected onto it by the reader.

The graphic novel, on the other hand, is more diachronic in nature given the format of the book and its narrative flow (although we do have panels within the panels). What do you think is gained and / or lost when Here becomes a graphic novel?

I don’t prefer one over the other, they both have their strengths. The room in the book is a larger image and fills a two page spread. It feels satisfying that the corner of the room fit’s into the gutter of the book. When you open the book you physically enter the space, it gives it more of a reason to exist in this format.

One thing I was very proud of was that when I decided to do the book, I was equally excited about what I could do with the eBook version. I wanted to take advantage of what the electronic version of the book could do to push the non-linear narrative. I was lucky to meet a developer and together we created a version that could be read faithfully as the book, or go into a ‘random‘ mode, which is kind of the ‘re-mix’ version. The program shuffles all the panels and backgrounds, making new combinations. I was able to incorporate animation too, here and there as a surprise something small will move in ‘real time’. Again I don’t prefer one over the other, they each use the strengths of their mediums, and expand the concept. 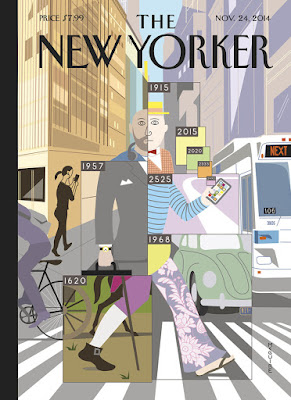 Why didn't you do more comics after the original 'Here'?

I made a few but my interests led me to different areas. I made a few books for children. I designed some toys. I was always interested in getting involved with animation, that led to eventually directing for TV and cinema. Having returned to comics I see the possibilities and the advantages very clearly. You can do things in comics you can’t in other mediums. The form allows for a flexibility with narratives, it can be as fluid an experience as reading a map, there are many possibilities. Film in contrast is very fixed and unrolls in one direction always. I’m interested in doing more experimental book projects, film and music too.

You were in Liquid Liquid and you contributed to RAW in the 1980s. Can you share with us those heady days of the 80s working / living in New York City?

We could do an entire interview on this subject. First of all It was a time when you could survive by paying very little rent, that made a lot of things possible. Being in a band we were invited to play clubs which allowed us to experience a lot of different scenes. Different cultures (black, hispanic, gay) were influencing each other in a very fluid way, and music was at the center of that. Graffiti was another cultural connection. Two people I was very fortunate to meet and become friendly with were both Keith Haring and Jean Michel Basquiat. I was very interested in making street art in those days, I would paste up drawings in the streets while I pasted up posters for the band, that work and the designs I made for our record sleeves was the first public work I made. I met Art Spiegelman and all the RAW artists in the late 80’s. Having already had a little taste of the booming art scene, meeting these cartoonists felt to me like what I imagine meeting artists in Paris in the 20’s must have been like. They were making work because they had no choice to do anything else, it had nothing to do with money. There was zero money to be made in comics at that time, there were no ComicCons, no blockbuster films based on comics, no graphic novels before MAUS. RAW artists were a passionate, international group, making exciting work and getting it out to the public the best way they could. It was thrilling to have the first comic I ever made published in it’s pages.

I have a few projects cooking. Possibly a virtual reality version of HERE. So far it’s just talk, but with some very interesting possibilities. I also signed an option contract to turn HERE into a TV series, which would be thrilling, but again it’s only talk until it happens. I have a new book coming out next month, it’s a collection of drawings I’ve made over the years for the New Yorker magazine. I am just starting to develop the next bigger project, it will incorporate multi-media. It’s both simple and complicated, it’s ambitious, and it scares me, so I know I’m pushing myself.

What do you expect to find in Singapore?

I was first here very very briefly in 1990, on the way to Indonesia to have my first toy manufactured. I’m looking forward to it, I don’t know what to expect!

Details of McGuire's talk at the Illustration Arts Fest are here: